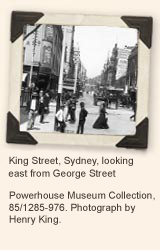 The years of the 1880s were prosperous ones for many in Australia, a continuation of the ‘long boom’ years from 1870 to 1890. New migrants were keen to enjoy the some of the highest incomes in the world – and the lamb chops! Migrants were attracted to Australia by the stories that Australians were so wealthy they could afford to regularly eat meat.

The economic good times would have an interesting impact on later years.

There was a speculation in land and property prices both in the cities and rural areas. With the good wages, some took their money and placed it in high-return building societies, investment companies and new banking institutions. Trade unions were increasingly being formed as workers sought to improve their work conditions and wage rates, to share in the bounty of these years. The first women’s trade union, the Tailoresses Union was formed in Melbourne in 1882, when employers in one business tried to reduce their wages.

This economic prosperity encouraged the aspirations and hopes that a new way of organising society could also be achieved. In 1885, Dr Edward Stirling of South Australia introduced (unsuccessfully) the first bill in any parliament of Australia to give women the right to vote. Leaders in the women’s suffrage movement like Catherine Helen Spence and Rose Scott established the first women’s suffrage leagues, to campaign for the right to vote for women.

First Nations people in the eastern states were increasingly coming under the control of Aboriginal Protection Boards. New South Wales followed the lead of Victoria and established their own board in 1883. The boards were given powers by their parliaments to require Aboriginal people to live on reserves, seek permission to gain employment, and denied the use of language and customs. They also removed children from their parents which led to the slave labour of teenagers and introduced strict conditions around freedom of movement and visitation of families.

With the growth of cattle and sheep stations in the western and northern parts of Australia by white settlers, First Nations men and women found employment as stockmen and domestic staff, with Aboriginal stockmen gaining a reputation as skilled horsemen.

A demonstration against Chinese immigration took place in Sydney, 1888.

Louisa Lawson started the magazine, The Dawn, and advocated for voting rights for women and divorce law reform, 1888.

Henry Parkes called for the colonies to form into one nation, 1889.

The Heidelberg School of artists established their first camp at Box Hill, 1885.

Work started on the first irrigation system on the Murray River, 1887.

Tamworth was the first city in Australia to use electric streetlights, 1888.