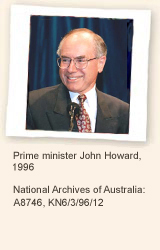 In the 1990s, the dramatic economic and social changes of the two previous decades were changing how Australians lived. As a result of the Cold War ending with the collapse of the Soviet Union in 1991, there was also a spirit of global optimism.

Continued Vietnamese, Chinese, Islamic and other migrants were changing the social fabric of Australian society. Many Australians thought that it was time for Australia to become a republic and to work for reconciliation with Indigenous Australians.

For First Nations peoples, the 1990s offered hopes of greater self-determination. In 1990 a national representative body, the Aboriginal and Torres Strait Islander Commission was established, which led to programs and consultation with First peoples. In 1992, the High Court recognised the Meriam people of Mer (Murray island, Torres Strait) as owners over their country, reinforcing land rights in Australia. This native title case was led by Eddie Koiki Mabo and his wife Bonita along with 33 Meriam people over a ten-year legal battle.

In 1997, the Bringing Them Home report by the Australian Human Rights Commission acknowledged and documented the forced removal of First Nations children by governments, referred to as the Stolen Generations.

The Port Arthur Massacre in 1996 where 35 people were killed shocked the nation. In response the Australian Government, working with state and territory governments, initiated the National Firearms Agreement so the whole country had identical gun laws. It meant a ban on fully automatic and semi-automatic firearms, new limits on who could use weapons, and standards on licences for gun permits.

First female heads of state with Rosemary Follett in ACT 1989 and Carmen Lawrence in Western Australia 1990.

Superannuation was introduced in 1992.

John O’ Sullivan and the CSIRO worked out how to make Wi-Fi work - moving data around inside buildings, 1996.

Astronaut Andrew Thomas was the first Australian to walk in space, 1997.