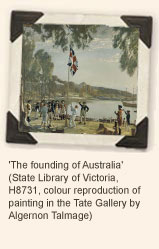 Prior to the arrival of the British in 1788, it is estimated there were between 500,000 to 750,000 First Nations people in Australia. When Arthur Phillip set sail for the land then known as New Holland, he was under instruction to open friendly communications with the First Nations peoples. The Gadigal people of the Eora nation did not receive this open communication.

The First Fleet left England on 13 May 1787, with 11 ships, approximately 1500 people - convicts, their marine guards and a few civil officers – and supplies. They settled on Port Jackson as the first site for settlement, taking possession of the land at Sydney Cove on 26 January 1788.

In 1788, the Gadigal people of the Eora nation were among the first to be impacted by invasion, colonisation and disruption from the First Fleet. Conflict between British arrivals and First Nations people soon erupted as it became clear the arrivals weren’t leaving, they were disrupting access to traditional food sources and were not sharing their food crops and animals with the First Nations peoples. First Nations peoples were determined and strategic in their resistance, using the slow loading speed of weapons as an opportunity to use spears and even intimidate and display resistance with dance. The Frontier Wars extended to surrounding areas and took over 30 years for the British to take hold of what is now the Sydney Basin.

Very few of the first British arrivals had any experience farming or building the infrastructure needed to run a small town. The soil around Sydney Cove was unsuitable for British farming methods. Soon, everyone, from the convicts to Governor Phillip, was on rationed food, and reliant on the supply ships. Exploration out of the cove soon found better land for farming at what became Parramatta.

In 1789 a major outbreak of smallpox devastated the First Nations population around Sydney. With no previous exposure to the disease, unlike the British arrivals many of whom had been exposed to smallpox as children, the mortality rates among First Nations people were very high.

Smallpox epidemic killed half the Eora population of the Sydney Basin, 1789.

A convict woman established the first school in the colony, 1789.