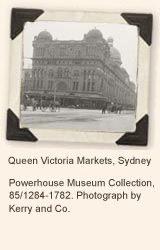 The 1890s were difficult years for many Australians, dominated by a major economic depression and class conflict between workers and employers. During the long boom years, banks had lent heavily to buy houses and build farms. But then there was a global downturn, prices fell and investment from Britain dried up triggering the depression. It was the worse Australia has seen.

In 1890 and 1891, the great maritime and shearers strikes by workers were defeated by employers with the aid of government, police and soldiers. In the face of these defeats, the labour movement decided industrial action alone would not advance better wages and conditions for workers. They instead formed political parties in the colonies known as Labor Leagues to win seats in parliament, form government and change the laws to make them fairer for everyone.

The idea to federate the colonies into one independent, united nation grew during these years to manage relations between the colonies, later the states. They did not want border and different rules to limit trade between the states. They also needed a national government to manage three big issues that impacted them all: immigration, defence and international trade. First Nations people were conspicuously left out of the negotiations that then took place between the colonies to form the new nation, with many increasingly under restrictions imposed by their state government. Not understanding the collective senior leadership decision-making processes within First Nation communities, colonial governments awarded breastplates as a form of royal title to single First Nations leader as a recognition of seniority and cooperation. Breast plates named a leader of their choice without a process or consultation. While breastplates increased negotiations they remain as objects that highlight inequality.

The first federal convention held to discuss the colonies forming one nation held, 1890-1891.

South Australia became the first colony to give women the right to vote and stand for election, 1894.

Australasian Federal Convention finalised the draft constitution. It goes to referendums for approval by the voters, 1898 to 1900.

30,000 women signed the Monster Petition calling for the vote for women in Victoria, 1891.

One of Australia’s worse droughts took place between 1895 to 1903, known as the Federation Drought.

The first film projected for an audience, Melbourne Opera House, 1896.

Lawrence Hargreaves took to the sky with four box kites, 1894.

Kodak camera released a pocket version which opened up photography for amateurs, 1896.