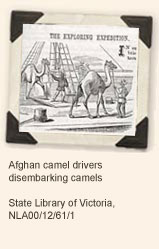 During the 1860s, grappling with the turmoil caused by the influx of migrants to the gold rushes, the colonies sought to find a way to open up the land and find employment for the new migrants.

Small-scale landholders sought to persuade the colonial government to take back control of land from the squatters and to make Crown land available for farming. These were mostly families keen to settle on land on which to grow crops and keep a few animals. They faced opposition from the squatters who found ways to keep the best and most fertile lands for themselves. This demand for land ignited interest in exploration into the regional and remote areas to find new land but also brought increased conflict with First Nations peoples who did not want to be removed from their country.

The Victorian Parliament passed the Aboriginal Protection Act in 1869 to establish the Aboriginal Protection Board. Victoria became the first colony to legislate for this comprehensive scheme to regulate the lives of Aboriginal people. The Coranderrk reserve, established in 1863, was the Victorian government’s first reserve on which Aboriginal people were confined. Coranderrk’s residents petitioned government repeatedly for independence and control over their own lives and is one of the first organised campaign for land rights and self-determination.

Explorers such as John McDouall Stuart and Burke and Wills in this decade led expeditions to discover land suitable for farming and map routes between settlements, including to map a way for the overland telegraph. In 1861 John King was found as the sole survivor of the Burke and Wills expedition. King’s survival was attributed to support from the First Nations Jandruwanta / Yantruwanta / Yandruwandha peoples.

The 1860s were also marked by racial tension and fear of non-white migrants.

As a legacy of the trouble on the goldfields in the 1850s, each colony introduced legislation limiting the number of Chinese people entering their colony. The forced slavery of South Pacific Islanders, Torres Strait Islanders and Papua New Guineans also began. They were often kidnapped from their home countries to work on the sheep and sugar cane farms in Queensland. Cameleers from areas such as India, Iran, Egypt and Turkey came voluntarily to work in the Northern Territory and South Australia, delivering stores and equipment to some of the remotest parts of the continent.

South Australia took over the administration of the Northern Territory, 1863.

The last convicts sent to Australia arrived in Western Australia, 1868.

The first Australian cricket team competed in England. It is all First Nation players including Jardwadjali, Gunditjmara and Wotjobaluk men, 1868.

Attempted assassination of Prince Alfred, the Duke of Edinburgh at Clontarf, Sydney, 1868.

The Acclimatisation Society of Victoria established to bring into Australia foreign plants and animals, 1861.

First train from Melbourne to Ballarat and Bendigo, 1862.

Burke and Wills expedition crossed from south to north, but both die on the return journey, 1861.