Jen's dad died in the war. Now her mum is planning to marry Wal. Even though Wal has a car, in Jen's eyes he definitely doesn't match up to her real dad. 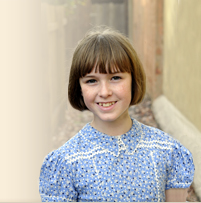